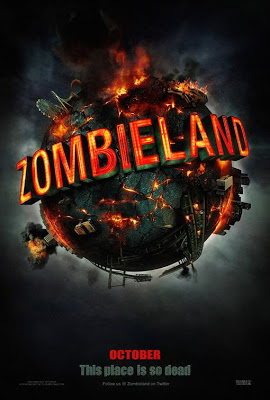 Monday night I went to the Chicago premiere of Zombieland.

Nothing can top leaving a hard day of work to go stand in line with a bunch of people dressed up like zombies.

I knew the premiere was going to be a lot of fun but I wasn’t sure about the movie.

The trailers didn’t sell me. The movie looked a bit hokey/corny and the humor felt a bit forced. I couldn’t muster up the desire to see a movie just by being told it was going to be funny. I needed more and thankfully the movie came through. Damn you, wrongly marketed trailers!

The virus that cause people to become zombies has finally taken over the world. The few survivors, Columbus (Jesse Eisenberg), Tallahassee (Woody Harrelson), Wichita (Emma Stone) and Little Rock (Abigail Breslin) unite together to find any kind of normalcy within Z-land.

The movie has great quarky antidotes to surviving the apocalypse along with kick ass zombie kills and a Bill Murray cameo. And this is on the list of one of my favorite intros. Very well done.

On the level of humor the only thing that didn’t do a damn thing for me was the catch phrase “nut up or shut up.” *Groan* in a riled up, packed theater, there was awkward chuckle and someone doing the slow clap. No other claps followed.

That’s probably just me being picky but I still thought the movie was great. Movies like these normally appeal to us hardcore zombie loving fans but Zombieland had something that even people who don’t like horror movies can enjoy.

I would definetly recommend this to people who like me, didn’t think it looked like a good movie.

Go see it this weekend as the perfect way to kick off the Halloween season!