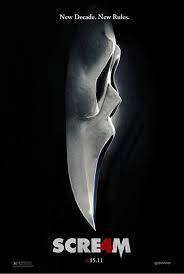 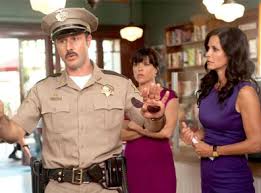 With the years passed, Sydney has written a self-help book about being a survivor. Dewey is sheriff of Woodsboro and Gale has retired her nosey reporter ways and is trying to settled into being a typical boring wife.
Sydney’s last stop on her book tour is no place other than where it all began, Woodsboro. Her arrival is welcomed with news that two teenagers were brutally murdered.
Sydney falls back into place with the “Ok, who’s the effin’ killer(s) this time?!” Dewey is ready to show he’s no Deputy Doofus by solving the case and Gale wants a piece of the action so she can write a new book about it.
Thrown into the mix are a new set of teens which play more of the lead than Sydney and friends.

Jill, Sydney’s niece, is getting harassing calls from a creepy caller and so are her friends. Jill’s friends start dying off and it’s looking like her relation to Sydney might be the reason for it…or is it?
Scream 4 is a refreshing addition to the Scream series. It’s a great homage to the first movie bringing back gruesome gore scenes, cheap scares (which are always fun in a packed theater) and an interesting twist at the end.
And I must add the things I’m proud of in Scream 4: Sydney FINALLY stepped up from being all whiny and fell into place of a real fighter. Through the other Scream movies she always had major weak moment especially when  someone close to her died. Not in 4. She was down to drop kick Ghost Face’s ass at any minute and when it came to people dying she was all “meh, seen it!” and didn’t let it get to her.

I’m proud that the opening scene(s) broke away from the previous traditional “well-known star gets randomly killed then the movie starts” routine. Don’t get me wrong, the opening scenes were great but I have to say that the compilation in 4 told the audience “Are you ready for some fun up in here ya’ll?!”
And the thing I’m most proud of is…. there was no found footage or Ouija board scene involving Randy explaining  “the rules.” Thank you Wes and Kevin! 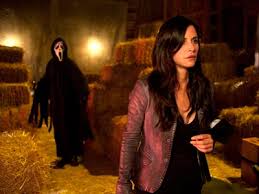 Though S4 is getting mixed reviews from all over, but as a horror movie fan and a lover of the first movie, I was very happy with the outcome of this movie. It was fun, cheesy at parts, bloody as hell and it had a message…. don’t ask, just go see it!

After the release of Scream 2, and despite running out of ideas of pulling off a perfect “who’s behind the mask” angle; Scream 3 was evitable.
Sydney is all grown up, living a secluded life in a little house in woods. She has a job as a phone operator helping out victimized women, a subject she’s quite familiar with. Though tucked away safely, Sydney is still haunted by the traumas of her past.

Meanwhile in Hollywood, during the filming of Stab 3, a Ghost face killer strikes again targeting cast members and leaving behind  pictures of Sydney’s whore mom.
The Woodsboro survivors once again reunite again to find out who the killer or killers are and what crazy motive do they have this time.
The trilogy of the Scream Sega stuck with the same formula of having an intense murder scene in the beginning, Randy explaining “the rules” of a trilogy (from beyond the grave), random people being killed off and lots of speculation.

The revelation of the killer came off as a “meh” moment and for something that was supposed to be the end of the series (or at least that’s what we all thought at the time) Scream 3 lacked an impacting “wow” factor. It did try to pull off something original so I give it street cred for that.
I feel that Scream 3 wrapped up the series nicely by tying together all three movies and even incorporating an extra story line to the original killers, Billy and Stu. For the effort made I was satisfied with the movie as a whole and as a trilogy or now threequel to the series.

In honor of Scream 4 coming out this weekend, I’m watching the Scream trilogy and now I continue this Screamathon with Scream 2.

It’s been two years since the tragic “Woodsboro Murders.” Survivors Sydney and Randy are now in college, Gail Weathers has a hit best-seller based on the murders and Dewey is..well…he’s still alive.
During a screening of Stab, a movie inspired by the Woodsboro killings, two college students are brutally murder and the Woodsboro survivors reunite to unfold another mystery of “Who’s the killer this time?”

The suspect(s) list include: Cotton Weary, the man wrongly accused for killing Sydney’s whore mom, Syndey’s boyfriend, her roommate, all her friends and that guy over there. Again, the killer can be anyone!
The rules in the first movie no longer matter now that a sequel is in play. The body count is bigger, there’s more blood and gore and never assume the killer is dead.

As far as the structure goes for the rules, the body count is higher but the blood and gore factor didn’t really surpass the greatest of the first movie. I mean Drew hanging from the tree, fantastic…her boyfriend gutted…it was art! And it should be an unofficial rule for every movie, even romantic comedies to never assume that the killer is dead. I’m all for the head shots!
I think the mixture of having Randy die (I”m still not over it!), and Mickey’s motive being uber lame brought down the vibe of what I was expecting.
As a part of a debate in the movie, sequels never seem to hold up to the original. I feel that Scream 2 does hold up as a decent sequel to the trilogy as a whole but I still feel that it’s the most lacking out of the series.
Screamathon: Scream
Scream Drinking Game

This weekend Scream 4 hits theaters so in preparation for the new series, I’m revisiting the first three movies as a part of my Screamathon.


Starting with the classic first movie…


Around a time when the slasher genre was dying a painfully slow death, Wes Craven and Kevin Williamson collaborated to awaken and modernize the world of horror movies with Scream.


Scream took a simple plot about a teenagers stalked by a crazed killer and added humor, flair and a structure of rules that every horror nerd knows by heart.


The opening scene starts with a girl, Casey, hanging out at home alone, getting ready to munch on some popcorn and enjoy a movie. Her night is interrupted by a phone call by a seemingly friendly stranger. A conversation about horror movies takes an odd turn when the caller reveals that he’s watching Casey. The movie’s intensity picks up when Casey is brutally murdered.

And let me just say, it’s one of my favorite opening sequences. It was the moment that I knew I would love this movie forever.


From then on the town of Woodsboro is shaken by the tragedy and memories of the murder of Maureen Prescott, town whore, still lingered after nearly a year.

Sydney, daughter of Maureen, becomes the main target of the killer and all of her friends start dying off or become the suspect. Sydney learns that she maybe fingered the wrong guy for her mother’s death and that the real killer is back to finish her off.

Scream brought back the core elements of what a horror movie should be, scary, bloody and engaging! Adding the intrigue of “who’s behind the mask?!” and the clever wit of the “typical horror movie” formula, made Scream an iconic film in the horror genre spiraling off many spoofs and other “who-dunnit” horror movies.