Yes, that’s a picture of a werewolf giving the finger…

There are a lot of great werewolf movies out in the world. You got American Werewolf in London, Ginger Snaps, Silver Bullet and of course Teen Wolf.

Then there are those not so great movies that are downright stupid yet you catch yourself watching them when it’s on because you still have a few hours before Doctor Who starts. My Tivo decided to randomly record two of these laughable lycanthropes movies and I randomly decided to watch them.

First up is Big Bad Wolf….

Title alone you know this movie isn’t going to offer anything stellar. It’s terrible in its own way but I cannot deny it has some enjoyable quirks.

Derek is a geeky loser who is trying to impress frat boys in hopes of becoming their friend. He steals the key to his stepfather’s cabin and promises the popular crew a weekend of fun in the woods. The frat boys bring along their frat groupies and Derek brings along his chick friend Sam.

When they arrive to the cabin, the fratty couples rush to have sex while Derek and Sam awkwardly hang out. The sexcapedes is interrupted by a ferocious werewolf with a colorful choice of words and insatiable urge to kill.

No big surprise that Derek and Sam are the only ones that survive the night but no one believes them when they say a werewolf killed everyone. They conclude that the werewolf must be Derek’s stepfather Mitchell, just because it was his cabin and he’s such a dick so it makes sense.

Derek and Sam start to investigate Mitchell and all signs point to him being a werewolf. The revelation of Mitchell’s secret life puts Derek in the position where he finally needs to balls up and take Mitchell out for good.

The cast is a mix bag of forgettable folk and some awesome ones thrown in. Mitchell is played by Richard Tyson who I’ll always remember as Buddy Revell in Three O’ Clock High. Kimberly J. Brown stars as Sam. She’s been in Stephen King’s Rose Red but we all know her from the Disney movies Halloweentown. And by “we all” I mean “me and my 8 year-old cousin.” Other well-known actors are Robin Sydney who is in a lot of Full Moon movies, David Naughton and Clint Howard.

You would think a plot like this would offer nothing more than some gory mutilation scenes and maybe a scare here and there but the reason why I really enjoy this terrible movie is all because of Richard Tyson.

Tyson’s portrayal of the foul mouth beast is comical. He’s so evil and a straight up asshole but kept me entertained throughout the whole movie. At the end of the day, that’s all I can ask for.

And then there’s Cursed…

When Cursed came out it seemed like it was going to be a water-downed movie but I just can’t resist Wes Craven. Well, until he did My Soul to Take but we won’t get into that now.

The only problem is…they don’t know who the werewolf is! Dun dun dunnnn.

Wes and Kevin tried too hard to capture the “who’s the person behind the mask” tension that only really worked well when they did the Scream movies together. Yes it’s exciting to speculate who the werewolf person might be and to yell out “Dude! I knew it!” when that person is revealed but it shouldn’t be the crutch of a story. I think Jimmy and Ellie are super lame and I’m pretty sure at one point Jimmy was checking out Ellie in a “How you doin’” kind of way. Ew

The things I did enjoy about Cursed was the random awesome cast and the ever so stupid dialogue between Bo (Milo Ventimiglia) and Jimmy. First off, cast roll call: Christina Ricci, Jesse Eisenberg, Joshua Jackson, Portia de Rossi, Shannon Elizabeth, Nick Offerman, Derek Mears, Craig Kilborn and Scott Baio. If you’re going to throw Scott Baio into any movie, it’s gets an automatic 50 plus cool points.

Now Milo’s character is Jimmy’s bully so of course he has to make a lot of crude insults. The insults are so dumb that I found myself laughing hard and saying “Who the hell talks like that? Diablo Cody maybe!”  That’s about all I did enjoy about Cursed.

The revelation of the werewolf was nothing spectacular and the only great thing about that werewolf is the above picture of the middle finger.

Big Bad Wolf and Cursed certainly aren’t the most terrible werewolf movies in the whole world ever but for being terrible movies, I give them credit for having hilarious moments that entertained me.

Now that Thanksgiving is over and I’m sure we are all stuffed with leftovers and such I thought I’d rock out another double feature post with a somewhat eating related theme.


One movie has a girl-turned-demon craving human flesh, finding boys to be easy prey. The other has a simple-minded girl that didn’t know that her lady junk shouldn’t have teeth down there.


Both girls get to a point where they use their evil/untapped munchies to their advantage. 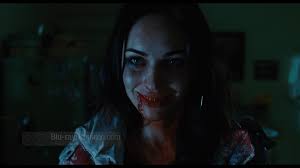 Jennifer’s the hot girl in a small town high school. She’s popular, kinda dumb and slutty as hell.
Jennifer stalks a new hip and hot band strolling into town, whom unknowing to her, is trying to use evil forces to become famous.
The band sees Jennifer as the kind of girl that is all flirt and no fuck so they use her as their “sacrifice a virgin to gain fame and power” ritual.
The ritual works on their part, but because Jennifer dropped her V card years ago, instead of dying, she returns as a hungry demon.
Jennifer uses her old hat tricks of seduction to lure high school boys into her meal plan. Once she’s feed, she’s lively, full of strength, and her hair is all bouncy-like.

It’s not until Jennifer’s BFF, Needy tries to stop her when Jennifer noshes on Needy’s BF…. OMG!
Jennifer proves that if you’re hot and become a demon one day; there’s no need to hunt down animals for food, just hook up with guys and well, rawr all up on them!
Teeth 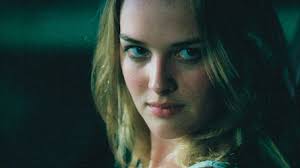 Dawn is the complete opposite of Jennifer. She’s sweet, oh so innocent and she’s all “Yay! Celibacy” too. While most girls get boners from thinking about their guy crushes shirtless, sweaty and doing push ups, Dawn gets her thrill tingles from thinking about marrying her crush. Lame-ass!
Dawn thinks that she’s perfectly normal and everyone else are the freaks. It’s ok that she doesn’t given into her humanly desire to screw around or that she thinks sex is something special that you should only have with someone your in love with and married to… oh and she also thinks it’s totally normal to have chompers in your tanger.
It’s not until Dawn is attacked and she um…defends herself does she realize that hmmm, something ain’t right down there.
At first Dawn doesn’t intentionally seek out boys to munch on. For most of the cases she gets angry, uncomfortable and things just get…well…nom nom nom nom nom nommm. 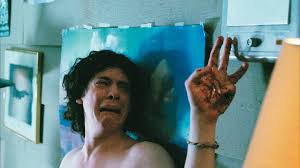 Dawn finally decides to embrace her inner whore and seeks revenge on her evil step-brother who has always had a thing for her. Yeah, ew.
Dawn could always find a way to fight people off herself, scream for help but no, it’s just so much easier for her to like her extra pair of teeth to do the work for her.
So everyone, pile up your plates and check these two movies out together.

I’m kicking off my first Double Feature segment with a “Bloody Love” theme of Let the Right One In and Thirst.
It truly breaks my heart that I live in a world where Twilight is glorified as the essence of vampire love. In these two wonderfully passionate vamp films, the love between the characters are more genuine and authentic and not just teens panting and cranking out the “I’m trying to be brooding but I look like I just shit my effin’ pants” looks on their faces.
In Let the Right One In, Oskar, the school wimp, is intrigued by his new neighbor Eli.
Oskar and Eli develop a playground kind of love. She gives him the courage to take on his class bullies by letting him know “boy, you got this!” when it comes to him finally standing up for himself.
When Oskar finds out that Eli is a dun dun dunnn vampire, he’s weirded out at first but then accepted her for her differences. Aww.


With Oskar only being 12 and Eli being the same “more or less” the two connect on a level that most adults spent years searching for. They’ve created their own world of Morse code and Rubik cubes that will carry on in an everlasting kind of love.

In Chan-wook Park’s Thirst, good-heart priest Sang-hyun volunteers for an experimental vaccine to end a deadly virus. The virus nearly kills Sang-hyun but a blood transfusion save his life. Sang-hyun later realizes that the blood he received was from a dun dun dunnn vampire.


Sang-hyun’s urge for blood and lusty desire spins out of control when his childhood friend’s wife, Tae-ju, comes to him looking for a way out of her boring life.

It doesn’t take long before Sang-hyun gives up his non-virginal priestly ways and gives into Tae-ju’s seduction.


Tae-ju freaks out when she finds out that Sang-hyun is a blood sucking vampire but after much thought she becomes fascinated with his world. Pfft, chicks.


Sang-hyun falls in love for Tae-ju and she takes advantage of him. After she gets him to kill her husband under false accusations, he kills her in a fit of rage. The moment he loses her, he realizes can’t let her go, so he vamps her up.


The reason why Sang-hyun put up with her was because he loved her unconditionally. Sure, it helped that she put out a lot and was down with his vampire stamina; but he knew that inside she was still that meek, innocent girl he meet when he was a boy.


Tae-ju puts her inner whore in check and remembers back to her youth when Sang-hyun was the little orphan boy she fell in love with. Tae-ju does love him but she let the freedom of the outside world take over.

And there you have double vampy love without the sparkly bullshit.

I’m not the kind of girl that knows the best way to pair wine with food. But I am good at pairing two things. One is, when I go to the movies I like to get Cherry Coke and Twizzlers. The flavor combination of the fruity tasting goodness produces the best tasting burps EVER. Yeah, I’m gross. Try it sometime and I assure you’ll say “Mmmm, that’s a tasty burp.”


Over the weekend I went to a Chicago Film Fest known as Terror in the Aisles and the theme was Killer Children. The triple feature included It’s Alive, The Children and Grace. Awesome right? It was. The fest gave me the idea to start having my own double features and of course write about it on here. I have a few duo ideas lined up so stay tuned later this week when I making this shit happen!

Bloody Love: Thirst/Let The Right One In