For this week’s comic recommendation I’m updating you guys on the follow up issues of Bob Howard: Plumber of the Unknown. It’s been a year since I mentioned the first one and there’s been 3 more since then!

In the second issue Bob tries to break free from the mess he dealt with in the first issue and now he’s trying his hand at other employment opportunities. It’s funny that Bob would want to escape a life of horror monster yet he’s babysitting children. Things don’t go as planned when his calling to take on the unknown wreaks his attempt at normalcy.

In the third issue Bob takes a job as a theater usher. This issue is a build-up for something bigger in Bob’s life.

The fourth and latest book is now my favorite of the series, we see a movie-esque view about Bob’s life and it gives us readers the story behind how he became the man he is today. It’s light on the humor and a little grim but that’s what I loved about it.

Rafael Nieves and Dan Dougherty brought together an inventive series through their imaginative stories and whimsical art work.

The thing I love about Bob Howard is he’s not a typical hero. He’s a working class guy who is great at conquering beast from the beyond. I’m happy that Bob’s story is progressing in his history which is making his character even more interesting.

If you haven’t check out this book the first time around, well, you should. You can find out more about this book HERE

If you live in Chicago, you may have heard of a little horror-esque theme shop called Horrorbles. And if you don’t live in Chicago, sorry but you’re missing out.
This horror anthology comic book takes place in the store of Horrorbles which is a local favorite to us horror fans who live in Chicagoland.
The comic is a homage to the old classic horror comics adding a flair of a modern edge.
Even if you’re not from Chicago, you’ll still enjoy the five fun, entertaining and creepy stories inside which are accompanied by dazzling art work.
I give a lot of props to John Aranza, Rafael Nieves and Dan Dougherty for putting together this comic and creating something that makes a horror lover feel at home through each page.
To have a copy of your very own, go HERE and enjoy the hell out of this book. Dark Horse comics are well-known for a lot of their awesome comics series. They brought us Buffy, Hellboy, The Goon and many more.

Recently announced on Shock Til You Drop, Dark Horse is releasing a new series called Colder.

Declan Thomas’s body temperature is dropping. He checks it every day, and it’s dropped from 98.6 to a current average in the high fifties. He never gets sick, never feels pain. He’s just an ex-inmate of an insane asylum that began operation in the 1890s, specializing in those poor souls deemed too dangerous for society. As to when Declan himself was admitted, the records were destroyed in a fire. His nurse has found references to him that go as far back as the 1940s…which is odd, since he doesn’t look a day over thirty.

Tommy Morris is a laid back teen who has a huge boner for his classmate Pam. When Pam invites Tommy to a party with the other cool kids, he jumps at the opportunity to get closer to Pam.

At the party, kids are hanging out and making prank calls to random people. The kids pick a number then tell the person on the other end “I know your secret!” They tell the person to meet them at the park at midnight as a trick. Tommy thinks the prank calling is lame ass weak sauce but Pam wants her turn. When she calls a random number the person on the other end yells in a demontic voice, “HOW DO YOU KNOW MY SECRET!?” She is a little freaked out but then finishes the gag by telling them to go to the park.

The kids rush to the park to see how many people fall for the prank but Pam feels unsettled by the guy she called. Tommy ensure Pam that she’s safe and there’s nothing to worry about.

The next day at school Pam gets a call on her cell from the same guy asking how she knows his secret. This freaks her out even more and then later that day she goes missing.

Tommy spends all of his time never giving up faith on finding Pam. Over a year later he finds out what really happened to her…..

When I first read this comic about 4 years ago, I heard a crazy rumor that it was going to be made into a feature film. That still hasn’t happened yet BUT it was made into a motion comic. So if you want to check it out, you can see the first part of the motion comic below. Enjoy.

Dead of Winter is a horror/sci-fi anthology comic with winter as the background settings.
As someone who loves anthology movies, a horror-esque anthology comic is equally appealing to me. A lot of the stories are creepy, grim and comical. So basically, it’s a mixed bag of awesome.
Some of my favorites out of the 8 stories are “The Perfect Angel,” “Safehouse,” and “The Pond.” With those aside, I still love the comic as a whole and thought it was fun and the stories were clever. Hence, this is why I’m recommending it to you!
If you want to learn more about Dead of Winter or get your hands on a copy, check out their Facebook page HERE.

It’s been almost a month since I went to C2E2 and I finally made the time to catch up on all the comic goodies I got my hands on during my journey.


One of the comics I was really excited to read was Death to Dinksville. A comic that contains sex, gore and zombies is always an instant win in my heart.


The first chapter introduces a string of characters but focuses on Lamar, a good but troubled kid. His mom is kind of a whore which gets him picked on at school. In the meantime, a psychopath who gunned down a high school 10 years ago escaped from prison and has set out to kill the “sinners” of Dinksville.


It’s bad enough that this guy plans on painting the town red with blood but at the same time a zombie-esque virus has also been released.


The readers learn more and more of a big unfolding story through each chapter. After I finished reading chapter three I was eager to learn more about the villains and the outcome of the town. But I have to wait for the rest of the chapters to come out.


The chapters are a quick read but they are all engaging and exciting.

Death to Dinksville will be a 13 chapter series. If you want to learn more or get the first three chapters, check out the site HERE

Crossed is centered around a group of people trying to survive a strange and brutal plague.


The infected have a cross-like rash on their face and much like zombies, they spread the virus through fluids. This plague causes people to act out their most violence and evil thoughts.

The group plan on traveling to Alaska where they believe the low population will keep them safe from any Crossed but the journey to safety is paved with dead bodies, the infected and lack of hope.


If you would like to check Crossed out visit the official site where you can get the comic or view the web comic.

Well I haven’t done a comics recommendations in a while so I’m glad my first one for 2012 is a fun and awesome one.


Monster Dudes is a comic which has a different series of stories featuring horror icons like Dracula, The Mummy, Sasquatch and other such monsters dealing every day modern situations.


As a horror fan, I was easily charmed by the humorous monster-esque antics in each of the stories (“Let Me In, Lady” being my favorite) but I think it’s a comic that anyone can enjoy. So it’s worth checking out!

I’ve been avoiding putting The Walking Dead as a recommendation because I figure if you’re a horror fan and you read comics, you should already be reading this.


On Sunday the mid-season finale of the tv series premiered and through many social media platforms I have read people saying “I should read the comic.” Oh my god people, if you know how to read, you need to be reading this comic!

If you’re not aware of the premise, well take a seat and let me tell you about it. Rick Grimes is a cop who ends up in a coma pre-zombie Apocalypse. Yeah I know, 28 Days Later much! But anyway, Rick awakens to find that the world is overcome by the dead and all he cares about is finding his wife and son.


When Rick is reunited with his family and fellow cop friend, the group start their quest to find a safe place they can call home and settle into a life worth living. Of course the blasted zombies always seem to get in the way of that along with some side drama.

The things that I absolutely love about this comic is that it’s a little bit fucked up. The world is gone, zombies have taken over yet the survivors are the ones that are the most dangerous people. It’s almost a real and raw look into humanity that we don’t know exists yet because we’re not in an end of the world situation. But it’s there.


Another thing I really love is that no matter what happens, and ya’ll some shit has happened up in here (I was emotionally damaged after reading Vol 8) the crew still have faith that they are going to find their way to a place they can call home. I love the idea that hope keeps them going and guides them fight another day. 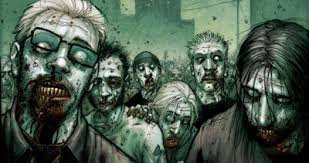 As far as the show goes, I have been enjoying the very few parts of the book being integrated into the show and that finale…oh boy. No spoilers about the show but as far as the book goes…. I was pretty damn shocked since that person is still currently alive in the comic series.


So folks, the remainder of the second series will continue in February and that should give you just enough time to go get the books, read them and feel depressed, disgusted, outraged and maybe even a little bit hopeful.


You can find the books at your local comic book shop or at Amazon.


And here’s a bonus- If you want to have fun getting stupid drunk, take a shot every time someone says “safe.”

Before Hot Topic got a whiff of the awesomeness of this comic and made it all trendy-like, Johnny the Homicidal Maniac was my first introduction to the world of comics.

As a fan of gore, bloody mayhem and humor, JTHM appealed to my morbid side.
Johnny is a crazed killer with a purpose. He drains the blood of his victims and uses the blood to put on a wall to keep a monster from escaping. What better reason do you need to chop people up?

Other than killing anyone who annoys him, which is pretty much everyone, Johnny does have a somewhat human side. He likes stars, the emotionless function of insects, watching people get abducted by aliens and so much more!
JTHM is no longer running so I’m recommending the Director’s Cut book of this because it includes the entire 7 issues of the series.