Looking for a place to get your geeky fix? Well, look no further! I rounded up some conventions and other events going on during February! Get your cameras and 8×10’s ready!

Meet Angus Scrimm, Corey Feldman and Jamison Newlander. Or go for The Devil’s Rejects and Hellraiser reunions!
Or just go for a bloody good time! 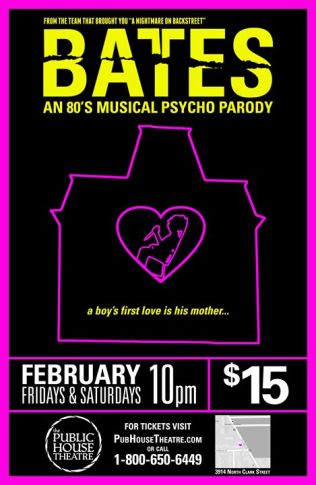 “Bates: An 80s Musical ‘Psycho’ Parody” is a twisted love story opening just in time for Valentine’s Day! So audiences who want something a little more heart-pounding can get their fix with the sweet-faced serial killer who embodies the saying, “A boy’s first love is his mother.”

I will be co-hosting this event so come out and have fun with me!

An icon of old New Orleans at the very dead end of world famous Canal Street, The Haunted Mortuary is an architecturally stunning manor located less than 3 miles from the enchanting French Quarter. This magnificent mansion was originally built in 1872 and actually operated for over 80 years as real mortuary. This actively-haunted, 14,000 square foot, 3-story mansion, is surrounded by New Orleans Cities of the Dead.

For HAuNTcon 2015, The Mortuary will be home to the conference wrap party, which includes heavy hors d’oeuvres, a cash bar, a live DJ, and a tour of the building’s basement haunted attraction. Guests will also get to tour a sampling of Santa’s Secret Workshop, the venue’s Christmas event, held every holiday season. Don’t miss this exciting opportunity to network and tour the actually haunted Mortuary Haunted house!

The Mad Mobster True Crime and Horror Expo is coming to Chicago Friday the 13th of February, 2015, Commemorate the St. Valentine’s Day Massacre on its anniversary weekend. Immerse yourself in the most shocking and disturbing true crime cases in history with the people that lived through them first hand. Meet the actors that brought some of these notorious characters to life on the screen as well as those that were inspired by them to create their own disturbing horror fiction.

Shock Pop Comic Con is a pop culture / anime / cosplay / comic con convention that is located in Fort Lauderdale, Florida. They will be showcasing dozens of cosplay and costuming events over the course of the 3 day weekend. In addition, Shock Pop Comic Con always brings in a roster of guest creators and / or celebrities for attendees to meet. Special attention is given to keeping the convention fun and accessible to families with low admission. Come join us at our next event! Where else in the world will you see Hobbits, Superheros, Jedi, Demons, Angels and perhaps a Wizard?

Walker Stalker Con is the fruit of The Walker Stalkers Podcast with James & Eric. The podcast began with an amazing trip to Senoia, GA where James & Eric were able to view the set of The Walking Dead and meet the incredible actors from the show. As a result of this experience, a podcast began and then the idea of a convention focused around recreating that same experience with the cast and crew of the show, along with talented actors and artists from other zombie shows, movies and art.

Walker Stalker Con is not just a convention. It is a fan meet-up and an opportunity for each guest to come away feeling like they’ve had an amazing experience and became part of a greater community of zombie lovers! Walker Stalker Con is three days of events, panels, and experiences that zombie fans won’t find anywhere else!

I will be at this event so look out for my coverage!

If you are hosting an event or know of one you want other people to know about, let me know and I’ll pass the information along!