At some point during our childhood, we heard some kind of cautionary tale about Ouija boards. Our friend’s cousin’s sister played with one once and died the next day. Or maybe our aunt’s neighbor’s butcher tried to throw one out only to find it by his front door moments later.

The Ouija board is known for being a scary gateway for ghosts and demons to reach out to the living yet we still get a little thrill from playing with one even just for fun. 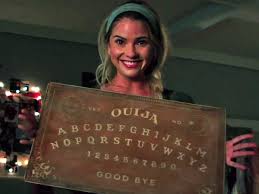 The movie Ouija exploits the fear behind the mystical device with a ghostly story about teens trying to reach out to their recently deceased friend. Their friend Debbie was acting strange up until her apparently suicide after using a Ouija board alone. Lanie, her best friend,  wanted closure for her death so she thought using an Ouija board was the duh way to go about it.

Lanie enlist other friends to join her in the quest to find out what really happened to Debbie. The group unknowingly welcome an evil spirit into their lives.

I knew going into this movie that it would be a little cheesy but I did feel like it was going to be a fun little flick to watch in the spirit of Halloween. Ouija did fulfill the required horror film formula of jump scares, tense build ups  and unsuspecting moments but it fell short on being original. At times I felt like I was watching The Ring. There were overwhelming amounts of similarities that made most of the movie really easy to figure out. 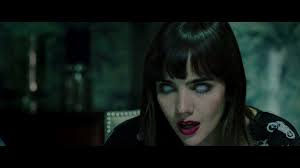 Special Effects artist Stiles White decided to take a shot in the director’s chair for Ouija and it’s noticeable that it’s his first time there. Ouija has its fun points throughout the movie but overall it does not work as a film that will stay with you after the credits are done.

Ouija is out in theaters today, if you’re in the mood for some simple scares then check it out!