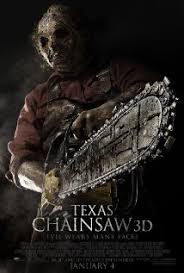 At the beginning of the year Texas Chainsaw Massacre 3-D hit theaters. I was all for checking it out with no expectations. I liked the idea of seeing stupid people hacked up with a chainsaw in 3-D! Well, when news hit that this new movie follows directly after the first original film yet it takes place in present time, (40 years later) it didn’t make much sense. Hearing about that kind of annoyed me so then I never bothered to catch the movie during its short theater run.
Yesterday while scanning through the new releases at Redbox, I noticed that TCM was available on blu-ray. I really wanted to see this movie despite the timeline issues and the lackluster vibe it gave off so I had to rent it.

One thing I can is the timeline didn’t bother me as much as I thought it would. Another thing I have to say is, this movie is dumb as hell! 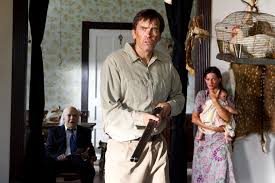 Following just minutes after the first film ended, Texas Chainsaw Massacre 3-D continues the story with a police officer arriving to the Sawyer’s farmhouse (don’t know why they didn’t stick with the original name Hewitt) demanding that Jeb (Leatherface) come out and own up to killing all those kids. The family, wanting to stick together no matter what, decided they need to give Jeb up for his mistakes.

Before Jeb can get out of the house, an angry mob of Texan hicks get to the farm and burn it down. They celebrate, thinking they killed off the whole Sawyer blood line, but one of the guys finds a baby still alive and he takes it to raise as his own.

Many years later, that baby, Heather, learns that her distant grandmother from Texas has left her a house and other such assets. Heather pieces together that her parents adopted her and they are dicks for lying to her for all of the years. Heather decides to go to Texas to claim the house and learn more about her family. Joining Heather along for the road trip are her boyfriend, whorey friend, some guy that friend is seeing and a hitchhiker they causally pick up on the way.
When they get to the swanky house and Heather is all in awe of her heritage, Leatherface reveals himself and well, cue chainsaw sound effect here.
Ok here are some of my problems I had with this movie:

Heather didn’t know the concept of wearing a complete shirt. She was wearing a half shirt throughout most of the movie then when she dirtied that up, she was given a clean button-up shirt. This girl refused to button more than two buttons! Ok this isn’t really a problem, I’m sure it’s great for male viewers but for reals, it annoyed me. I was all “damn girl, get your clothes on up in here!”

All the characters were dumb and forgettable. It got to the point where Heather was the only survivor left and even she didn’t care that everyone she knew was dead.

Next, to me, Leatherface is ferocious killer yet in this movie he’s a docile, misguided, disabled child. It was a crap attempt at give his character some sympathy which is just lame. Le sigh.

A semi-spoiler, but not really, but you don’t really care anyway: I’m just going to say that the words “Do your thing cuz!” are said in this movie. It was hard for me to contain myself at this point. I can honestly say I about lost my shit.

The one thing, ONE thing I did enjoy about this was the gooey gore. I wanted to see people getting hacked up with a chainsaw and oh yeah I got it!
Other than that I really just wanted to punch my local Redbox in the face.
If you want to check this out, you should just to say you saw it and to form your own opinion and such but… you were warned!