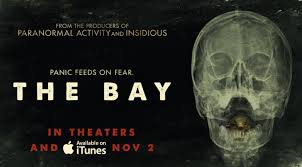 There is one thing that terrifies me more than zombies, aliens, or running into an ex on a bad hair day and that’s parasites.
True story….
A friend of mine was once really ill. She didn’t bother going to a doctor because she feared an expensive bill so she decided to wait it out to see if her illness would go away. A side effect to her sickness was she was unable to use the bathroom and  her stomach was swelling up. After a few more days of feeling bloated, she went to the bathroom and peed out a large amount of eggs. It freaked her out enough to make her finally see a doctor and she learned that she was harboring a parasite. It was a quick fix of antibiotics and staying off dairy for a  year but the parasite was traced back to her drinking from a dirty outdoors water fountain. It only took a mindless, every day task to infect her with the parasite, so imagine how easy it could be for anyone to get any kind of parasite.
The Bay is a faux documentary based on a deadly, catastrophic event in a small Maryland town.
The narrator of the film, news reporter Donna Thompson, survived the aftermath of the event and wants to get the word out on what really happened.
The government confiscated most cameras and recording devices in the town to keep what happened a secret but Donna was able compiled footage from her own camera and a collection from other people. 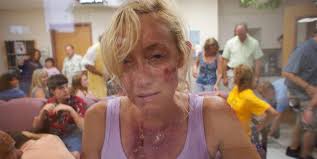 The footage starts off with the town celebrating their Fourth of July activities. Donna was starting out as a reporter at the time and wanted to capture the feel of the town. Along with the excitement of the parade, crab eating contest and other fun activities, the people in the town start getting sick. They discovered boils on their skin, followed up vomiting then it was all down hill from there.
Soon the hospital is filled with infected people dying from a parasite eating them from the inside out.
A mutated parasite was able to get into the town’s water supply and in a span of a day, the majority of the town was wiped out, leaving piles of chewed up dead bodies.

I know that the whole “found footage” era in horror movies can get annoying and overdone; but watching footage of people going through symptoms, or being killed by parasites is more frightening than watching a ghost move stuff around or having things fly at the screen. It’s not an attempt to give you the person’s visual perspective but it’s giving you an insight to what these people are going through during their time of emotional and physical deterioration. 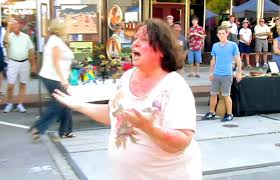 Movies such as Outbreak and Contagion show how panic-driven and fatal the world would be if a deadly diseased was released but The Bay takes on a different approach focusing on how a small town can be destroyed by something as easily as a parasite.
If you’ve seen the show Monster Inside Me, it views different cases where people have been infected with a parasite and the horrific effects it had on them. Stuff like this does happen which makes The Bay even more scary.
I know in my life time I’ll never be bitten by a zombie or vampire but it is very likely I can get sick by a tick or mosquito. It’s an unsettling thought to think about all the unknown dangers lurking in our average everyday lives and The Bay is just an example of that.
The Bay is playing in selected cities and it’s available on VOD and ITunes.