The whole “loner, weirdo girl” premise has been overdone in the horror genre. I don’t think there’s anything wrong with it but it gets hard to do anything colorfully original with a girls gone bad type of story.  That is until Excision brought a refreshingly new view and visceral tone to inner workings of a psychotic mind.

Pauline is not only an outcast in school but she also gets an unwelcoming vibe at home. She doesn’t get along with her overbearing, controlling mother. Pauline fights against all of her mother’s wishes to have a simple life of normalcy. 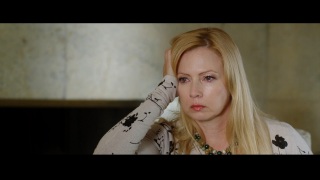 For her mother, it’s hard to live a life with a lax husband, a difficult daughter and another daughter suffering from cystic fibrosis. Pauline knows that her mother has more love and care for her sister than she does for her. It makes it easier for her to hate her mother and do anything she can to annoy her.

Pauline is at the peak of her youth where she feels more sexual awaken and open to explore aspects of the dark nature rumbling inside of her. She doesn’t shy away from anything and that’s what I love about her character. She’s bold and she know what she wants. She doesn’t care that she comes off scary and off-putting, she embraces it. In a strange way it’s a part of her charm.
Pauline sees her sister’s illness as an opportunity to test out her surgical knowledge. In her heart, she wants to fix her sister. She wants to believe that she can pull it off successfully and in some way gain a fraction of love from her mother.
I was excited to see this movie just because I thought I would be in for a crazed, blooded soaked adventure but in the end, I felt heart-breakingly sad for all of these characters. The glamorous fantasy world that Pauline built for herself collided with reality and the result of that hit a devastating level.

One of the strengths of this film is the casting choices.  AnnaLynne McCord gave an outstanding and tragic performance as Pauline. It has to be hard to play a character that’s unhinged yet still be likeable but McCord owned it. Traci Lords took on a challenging role to play a mother who tries to deal with an unstable daughter. She brought a lot of heart into a character who can be harsh with words but as a way to project overwhelming love. I also love seeing John Waters, Ray Wise, Malcolm McDowell and Marlee Matlin as minor characters.
I knew before I watched Excision that I would like it. I knew 20 minutes into the film that I loved it. Now nearly 12 hours later, I’m still trying to shake off the intense, emotional blow the ending left on me.
Even though I still feel unsettled and sad about Excision, it is easily became one of my favorite films of the year.