With the new Muppets movie coming out, it got me to think about a few things. First of all, what the hell is a Muppet anyway? And secondly, why aren’t more kids creepied out by them?

I know that Muppets and Sesame Street have shaped a lot of generations with their attempt at educational values and overall entertainment. But little did you know that behind those everlasting smiles, plastic eyes and fluffy bodies, there is a dark side to the muppet species.

Before Peter Jackson became all Oscar fancy with his Lord of the Rings work, us horror fans knew him back in the day when he was a chubby director doing zany movies.


Meet the Feebles takes a look at the gritty behind the scenes truth of a popular Muppet-esque variety show.


The problems begin with Heidi, the star of the show finding out that her man has been cheating on her. Tsk, tsk. Then we learn that the other co-stars are wrapped in the their own troubles of drugs, thievery and even murder!


When I saw this movie a few years ago, it blew my mind! Seeing muppety characters indulging in such things as sex and drugs not only put my real life to shame but Peter Jackson opened my mind to the realization that even “happy, read books and learn stuff” children’s tv characters can get down and dirty. And how!

As a fan of the show Angel, I’ve spent many years becoming emotionally invested in characters and situations. I’ve had endless “gasp!” moments, yelled at my tv a few times and had a real rough time when people died. Seriously, when one character died in the middle of the final season, I refused to believe it till the finale. I thought “Wow, I guess they are really never coming back” when the last episode ended. True story.


Anyway, with all the seasons and all of the drama, the Smile Time episode disturbed more intensely than other episode…ever!


The episode opens with a boy sitting around in his living room watching his favorite show, Smile Time. The puppets on the show are doing their thing with the singing and being all educational-like until one puppet tells the boy to put his hand on the tv. Of course the dumb-ass kid does it because tv puppets would never do anything to hurt him, right? Um right?!? Well, the puppet drains the life out of the boy then leaves a permanent creepy ass smile on his face. Double shudder!


When Angel finds out what’s going down, he goes to the tv studio to confront the puppets then poof, they turn him into one of them!


I don’t know what scares me the most, knowing that a puppet can steal my adorable and charming essence so very easily or that they can make me into one of them. Both ideas are too terrifying for my mind to explore. 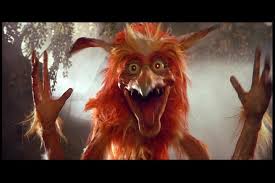 Labyrinth is a diversity of creepy. You got muppets stealing babies, David Bowe’s balls up in your face throughout the entire movie then there’s The Fire Gang.


Ok at first when they come on screen you’re all like “Yeah, they look kinda crazy but hey they’re singing and dancing so they must be friendly.”


Wrong! Into their little number one of them pokes his own eyes out! Who does that!? Then comes the head throwing, then the molesting of poor Sarah.


They can’t fathom why her head won’t come off so they try ever so hard to remove it for her.


While journeying through the Labyrinth, Sarah has a few run-ins with an assortment of odd characters but none of them are as scary these lovers of decapitation.

I decided to watch The Dark Crystal recently in preparation for seeing the Muppets movie. They’re cousins in case you didn’t know.


For a PG kid’s movie, The Dark Crystal is a damn horrifying flick. All the puppet-y characters are scary lookin’ and they all basically want to harm someone. You got feather-less vultures, a lady crypt keeper, robots crabs and more! Hell, even the good elves have kind of an off look about them. It’s almost like “We look so sweet and innocent that you’ll trust us when we wisk you away to the forest…then eat your soul! Muahhaha” Yeah I’m on to you elf people!


Anyway, again there is more essences stealing amongst the world of puppets. In this case it’s to keep an evil vulture creature thingy young but it’s seems like a common thing with muppets/puppets wanting to steal our essences. Let’s hope it doesn’t catch on.

I grew up watching The Muppet Babies and even as a child, I knew something wasn’t quite right with Nanny. I don’t know it was the socks that didn’t go with her outfit or because she was shitty at her job, but the fact that she didn’t have a face always bothered me.


Whenever Nanny took a second from doing whatever to check on the kids, they always had a bit of fear in them because they didn’t want to get caught horsing around. There’s something to that.


Nanny was the only human on the show and she stood as the parental figure in the Muppets’ lives. So where were the parents?


Ok stay with me on this…. I believe that Nanny is a barnyard fetish freak whom stole all the kids from their parents and stuck them in a nursery making them grow up together, fall in love and then eventually ya know, do it. Oh and she stole Gonzo from Area 51 to spice things up.


Nanny is a part of a plot to create the ultimate hybrid of Muppet then sell them to Science as an experiment to take over the world.


Ok even if my very logical theory doesn’t strike your fancy, you can’t deny that  the character of Nanny doesn’t fit into the muppet world so maybe, just maybe she has a more sinister motive.

One thought on “The Dark Side of Muppets”