The closest I’ve ever come to being punched in the face is when one of my dogs whipped one of those rope toys at me and it hit me square in the face. I thought to myself  “This isn’t as awesome as I’d hope it would be.” And yeah, I kinda hoped it would be awesome but then I also thought “Wow, I guess this is what it must feel like to have a truck hit your face!”


Ok so I’m slightly over-exaggerating the pain factor just a little bit. But on the other hand it got me thinking to the all the movies scenes where trucks play a role of their own. Characters run out into the unknown then…KAMBLO! A truck is all up in their face yo! And the end result of that quickie relationship is a lot of splatter. And as everyone should know, I love myself some splatter ya’ll!


So here I made a list of the trysts trucks have had with people’s faces.


So little kid Gage runs after his kite which seduces him to go into the road. Gage’s stupid dad is too busy giggling and trying to have a Hallmark moment with his family that he doesn’t watch his son carefully and well…truck and face collide as one.

As horrible as it is to picture this like 5 pound kid getting hit by a truck, I didn’t feel all that bad for him when he came back to life and just had that measly stitch on his face. Apparently he didn’t get as dinged up as we all thought which in a way is slightly comforting. And also, he came back bad-ass so that was pretty cool too.

What happens when you try to eff with the son of Satan, well birds will peck at your face then force you to a paved death.


This is my favorite of the list mainly because her face literally greets the truck. Check it out.

In the fourth Child’s Play movie, Chucky is beyond deformed and all grossed out plus, he’s got a wife with him this time.
Yeah, JUMP BACK at the thought of that! 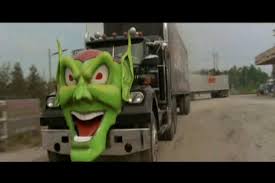 When the universe shifts and trucks start coming to life and thinking on their own, the one thing they are going to have on their metal minds is the thought of mowing us down! And they will!

I’m not afraid to admit that I did not like House of 1000 Corpses. I tried to give it a shot, I really did! I even saw it at a drive-in setting right before The Devil’s Rejects came out. I still could not make myself like it not even a little bit; but at the drive-in I met a couple that insisted that I watch The Devil’s Reject. They were fellow horror fans and I’m always up for suggestions so I sucked it up and saw it a few days later.


Yeah, I enjoyed it a lot and not just because Rob Zombie actually pulled off character development but also because of this stain of a scene.


(Sorry for the crappy quality, it was the only clip in the world of this scene I could find, wa wa)

Not trucks but still….


Suicide Club (my forever favorite opening scene to any movie ever)

So folks, I hope these scenes have taught you to look both ways when crossing the streets.


And maybe also don’t mess around with the devil’s son, serial killers, death, the universe and nature.


And that concludes my list on facial matchmaking with various vehicles.

2 thoughts on “Truck Meets Face: A Marriage in Splatter”