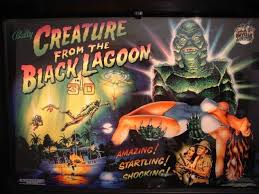 Everyone has their own favorite monster movie and Creature from the Black Lagoon is mine.
A scientific expedition for fossils in the Amazon river leads explorers to a mysterious Gill-Man creature.
The sea creature has taken a liking to the female passenger so he…it (?)… kidnaps her so her fellows hunky companions must defeat the creature to save her. 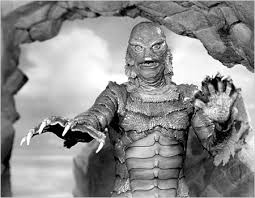 I think I love Creature above all the other Universal film monsters because he truly is a pure monster. Unlike the Wolf man or Frankenstein’s monster, the Creature was never once human. Also, I love sea creatures in general so that helps my love for this film too.
I once had the amazing experience of seeing this in the theaters and in 3-D! Yeah, I know 3-D is sooo posh these day but to see this classic B&W gem in that state made it super special sauce.

Another thing I love about the Creature is the mystery behind his background. He’s apparently ancient but we don’t know how long he’s lived and what’s up with his motives or why he exists. He’s like a bad boy I’m willing to go out of my way to figure out.

It’s the unknown and complexity of the Creature that makes this one of my top 10 favorite films.