It’s time for another round of Final Girl’s Film Club and this month’s selection is Jack Hill’s directorial debut classic film, Spider Baby (or The Maddest Story Ever Told).


A look into a loving yet demented “family,” Bruno (Lon Chaney Jr.) a caretaker/chauffeur is left to take care of three child-like adults that suffer from “Merrye Syndrome.” The syndrome causes the kids to mentally and socially regress back to a young age though they are fully formed adults.  The children keep to themselves in the seclusion of their family home but they are also kept at a distance from the world because they are dangerous. Distant greedy relatives decide to drop by to claim the property and the revelation of the Merrye family’s mental state turns deadly. 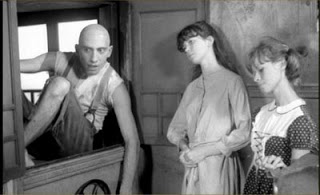 The thing I love most about this film is the performance of Lon Chaney Jr. The character Bruno shows a lot of restraint and patience with the children. They do bad things and they feel like they will be hated for those things. Bruno can’t fault them because of the raw genetic deal they got. They don’t know any better so he cleans up after their messes and consoles them instead of trying to establish right from wrong. Bruno grows tired of his duties but he promised their father that he would care for them. Chaney’s song in the beginning of the film sets the tone of what crazy wild ride the audience will experience but his character is the glue to the maddest in this story. 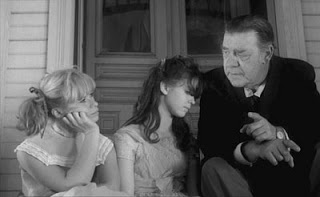 The other performances are masterfully convincing. Virginia, who is known as Spider Baby, thinks she’s a spider. She eats bugs and trap people in her “web.” Ralph (played by the infamous Sid Haig) is the grunting ape-like “dumb” one and Elizabeth is the whiny tattle-tale of the three. All the characters have to illustrate how damaged and youthful the kids are all without recognizing their physical age.


The end of the film has two important elements. One being Bruno’s final step to taking responsibility and a questionable open ended-ending. Don’t you just love those “The End…?” moments? Well, I do! I’m attempting to be vague to anyone who has not seen this but it’s a great ending!


Spider Baby’s dark tone and black humor makes this worth checking out.